Looking back, the so-called Amarna period was an amazing period of Egyptian history. A period during the latter half of the eighteenth dynasty (1543-1292 BC), it was characterized by phenomenal advancements in religion, sculpture, architecture, language and art. It all started with the pharaoh and his queen shifting their royal residence to Akhenaten (‘Horizon of the Aten‘) in what is now Amarna. It was during the reign of the Pharaoh Amenhotep IV, who changed his name to Akhenaten (1353–1336 BC). Not content with a change of name and royal residence, Akhenaten had every intention of doing everything differently from the established order.

Dawn of A New Order

The name change of the Pharoah was a precursor to a monumental shift in a deeply religious Egyptian culture. The millennia-old polytheistic religion of Egypt was being replaced by one where the sun disc Aten was worshipped over all other gods. Aten was not solely worshipped (the religion was not severely monotheistic like the latter day Semitic religions of Judaism, Christianity and Islam), but the other gods were worshipped to a significantly lesser degree (Henotheism). However, these deeply disruptive changes didn’t last long. Soon after the Pharoah’s death, the old order struck back and the ancient Egyptian pantheon of the equality of all gods and goddesses was restored under Akhenaten’s successor, Tutankhamun. 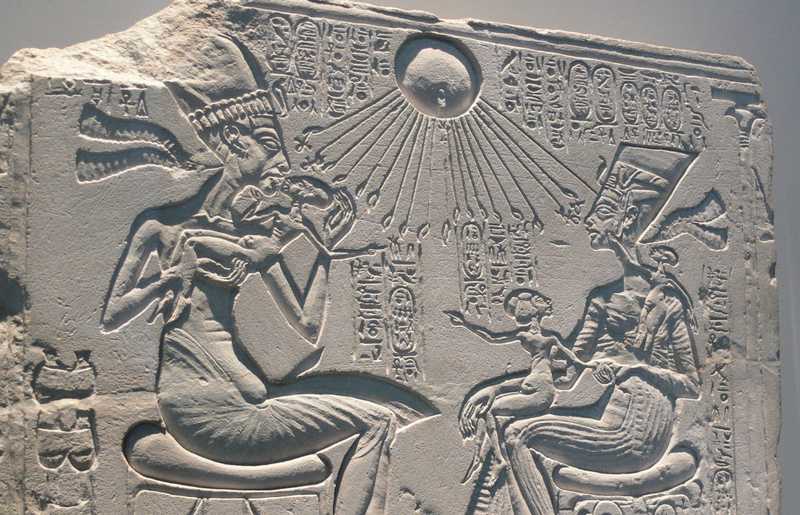 Apart from the short-lived changes in the religious order, there were radical innovations in art and architecture. The Ossified representations of Egyptian art was replaced by a thoroughly modern art form. This can be seen vividly at the Karnak Aten temple. Colossi and wall-reliefs from the temple are highly exaggerated and almost grotesque when compared with the formality and restraint of its predecessors. Today, they look modern and beautiful, but would have had a profound shock on the normal public who had exposed to staid and linear representations for a millennia.

However, nothing could be compared to the profound revolution, Akhenaten instigated in the architecture of the city of Amarna. This is something the archaeologists are slowly learning and reconstructing (digitally) as they go about their excavations there. The royal city of Amarna was constructed on a virgin site, on the orders of the Pharaoh Akhenaten. The city both inspired and instigated various sections of the Egyptian elite – since it was dedicated to Aten, the solar deity proclaimed by the Pharaoh as the Lord-Superior. Amarna boasted revolutionary architecture. For example, most of the temples were constructed without any roofing, thus symbolically allowing the unobstructed passage of the effulgent rays of the solar deity on the worshipers inside. For the museum connoisseurs, Neues museum in Berlin has a recreation of the open-roof structure at the Rays of Aton gallery with displays of the Amarna period. You could download the Vusiem App Guides for Neues museum here. Several artefacts of the Amarna period can also be found at the Louvre museum. In case you want to give it a virtual visit and get to know about these artefacts of the Amarna period with HD images, you could download the Vusiem Louvre Museum visitor guides here.

Many of these monumental structures were built with the use of standardized stone bricks known as Talatats (as opposed to the unwieldy huge blocks of stone). So while the city of Amarna was physically razed from face of the earth by the later ‘traditionalists’, its interesting architectural features have caught the attention of historians and archaeologists. The experts over at Archéovision have digitally reconstructed the royal city of Amarna with incredibly detailed 3D rendering techniques. Have a look at this excerpt video rendering below, which brings you a reliving of the grandeur of the period with an amazing 3D reconstruction.

You can Participate in the Renovation

This is only the reconstruction of a very small portion of the massive 22000-odd Talalats, spread over a 4000 Sq. Meter area. The ambitious digital renovation project still has a long way to go. Due to the enormity of the work involved, the Archeovision Laboratory along with the University of Bordeaux is running a crowdsourcing project directly involving the members of the public. If you are interested in participating, check out the Aton-Num Documentation project (http://www.aton-num.fr/document/).