The XXXI Olympics has begun at Rio in Brazil. As always, it promises to be a spectacle of, well, Olympian proportions! This Olympics has 42 sport disciplines (306 events) and is spread over 19 days of intense and thrilling competition amidst the sandy beaches and spectacular surroundings of Rio.

The original Olympics dates back to 776 BC. Held at the mount of Olympia, these games were the oldest and most important of the four national Greek athletic festivals. Like modern times, these were held on an official basis every four years from 776 BC. According to Greek mythology, Hercules devised the running races at Olympia to celebrate the completion of one of his twelve labours. Olympia was the most important sanctuary of the god Zeus, and the Games were held in his honour. Sacrifices and gifts were offered, and athletes took oaths to obey the rules before a statue of Zeus. 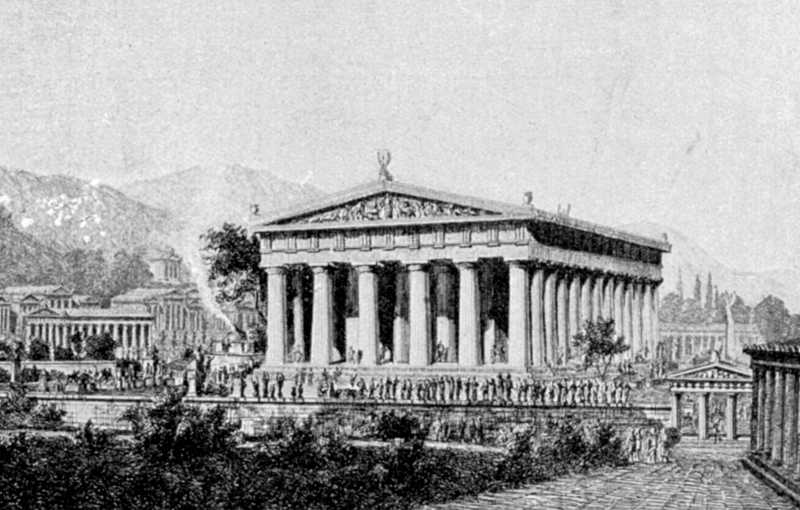 There was great pomp add show preceding the events. Heralds were sent out to all the major Greek cities around the Mediterranean announcing the events and inviting participation from the best athletes. During this period from a month before the games, the Sacred Truce held. Hostilities were forbidden during the truce to safeguard those travelling to and from Olympia. The athletes were all male citizens of the city-states from every corner of the Greek world, coming from as far away as Iberia (Spain) in the west and the Black Sea (Turkey) in the east. Despite the intense hostilities amongst the Greek cities, the truce held due to the religious nature of the games! (The same cannot be said about the modern era when the Olympics had to be cancelled during the period of the Great world wars).

Have you ever wondered what the original Olympics looked like? Which events were included? How long did it last? etc. No doubt, the curious mind would like to know. Fortunately for us, great records of these Olympics survives in the form of vases, statues and inscriptions. Several are on display at the British Museum, Louvre, Altes Museum etc. Do not forget to look them up if you are visiting at the time of the Olympics. (One handy way to browse these museums would be through downloading the Vusiem app guides for these museums).

Schedule – Then and now

To see how the games have changed over the years, First, let us start with the schedule. Unlike the modern 19-day jamboree, The original Olympics was a 4-day whirl of competitions preceded by swearing-in and speeches. The fifth day was the procession to the temple of Zeus and the awards ceremony, ofcourse, no doubt followed by celebrations.

The modern day Olympics has 42 sport disciplines with a constant demand to include more sports. The first Olympics in 776 BC started with only one sport (Stadion – Running races). However, due to the increasing demand additional sports were featured. The most popular sports events were across four disciplines – Equestrian races, Pankration (wrestling), Athletics and the Pentathlon. They included wrestling, boxing, long jump, throwing the javelin and discus, and chariot racing. In the pentathlon, there were five events: running, wrestling, javelin, discus and long jump. One of the toughest events was the race for hoplites, men wearing armour and carrying shields. 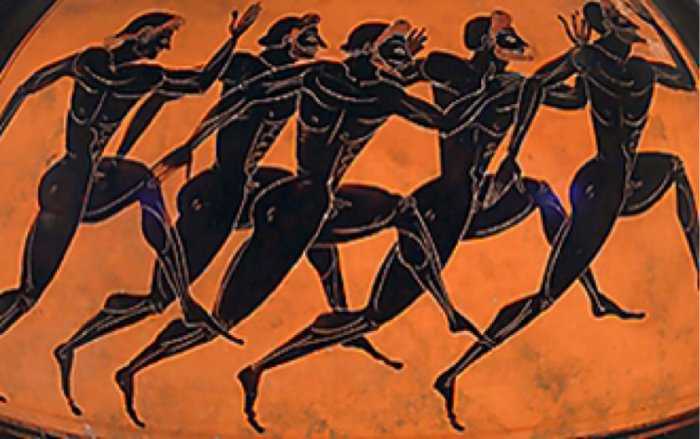 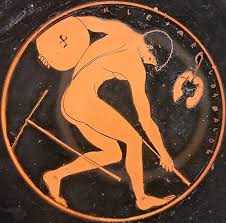 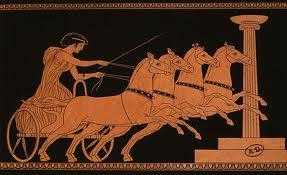 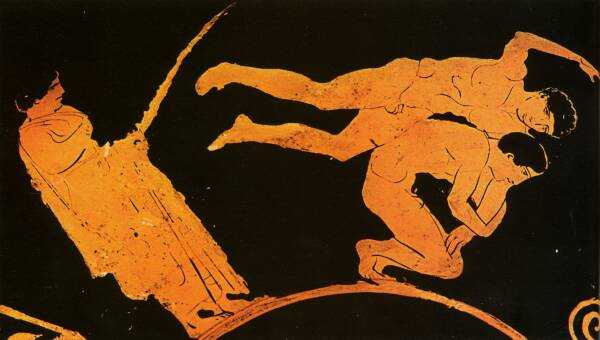 There are literally hundreds and thousands of black and red figure vases, plates and amphorae that have survived to tell the Olympian’s tale. The best place to find start browsing would be the fantastic Greek pottery collection at the Louvre, or the British Museum or the National Archaeological museum in Athens (Click the links to download the Louvre App / British Museum Apps). More about these events in our later blogs!

These days, it pays to be a Olympian. Apart from the sponsorships, the winners take home a gold-plated medal. In the Olympics of ancient Greece though, only the winner got the award. No prizes for coming second. The winner of the events received a crown of wild olive (Just like Hercules when he is said to have run the first races at the Olympics with his brothers). 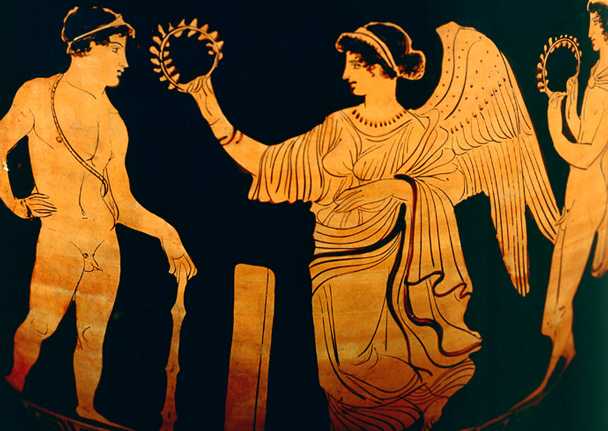 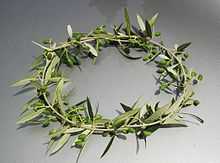 Victory at Olympia brought the greatest prestige. Winning contestants were allowed to put up statues of themselves inside the sanctuary of Zeus to commemorate their victory. Many bases for these statues survive. Statues of athletes and statesmen were a prominent feature of Greek cities and sanctuaries. Athletes tied a woollen band around their forehead, and sometimes around their arms and legs, as sign of victory. Winners at Olympia received crowns of wild olive, just as Herakles was said to have done when he had run the first races at Olympia with his brothers. In this scene he receives a garland from Nike, the goddess of Victory.

Do we know who these “Olympians” were?

Just like now, Olympics winners were received to a hero’s welcome in their homelands. Several inscriptions and statues were put up in their honour and legends about them survived. The sophist Hippias of Elis was the first to draw up a list of Olympians in his work “Olympians inscription” . You can find a nice compilation of the ancient Olympic winners here !

What about the Facilities and Spectators itself?

There was one thing certain about the ancient Olympics. It was always held in Mount Olympia overlooking the temple of Zeus. Unlike the modern day haggling event called the Olympic Venue Selection. It was held in a massive stadium that could seat around 50,000 spectators. Important visitors and athletes had hotel rooms. Spectators mostly slept rough with poor facilities. Enterprising businessmen, just like today, came in large numbers to sell their wares. Jugglers, Acrobats and Entertainers performed in the sidelines. Politicians, like always, never missed opportunities and gave speeches to the visiting hapless crowds! 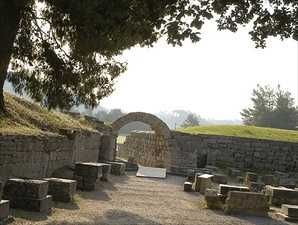 Where were the Women?

Today’s Olympics is a fairly egalitarian sport enshrining some of the loftiest ideals for mankind. There is even a paralympics to recognize the achievements of the disabled. Women and men, to a large extent, compete on equal footing and are fairly recognized. But it was not so in ancient Greece. Only men, boys and unmarried girls were allowed to attend the Olympic Games. Married women were not allowed at all. Any women caught sneaking in were punished! However, unmarried women had their own festival at Olympia every four years. This was the Heraia, held in honour of Hera, wife of Zeus. Women could compete in running races. Only unmarried girls usually took part. Winners were awarded crowns of sacred olive branches, the same as men. Generally, Greek women other than the fabled Spartans, did not go in for sport.

The ancient Olympics tradition continued on every four years for twelve centuries till 393 AD, well into the onset of Christendom. With the fading out of the ancient Greek religion, the ancient Olympics faded into history before they were revived by the heroic efforts of some such as Baron Pierre de Coubertin in the Athens Olympics of 1896.

As the Olympic slogan goes, Let the Games begin!! Over the next few days we will be bringing relevant highlights of the Olympian sports of ancient Greece. Stay tuned. Follow us on our facebook and twitter pages.