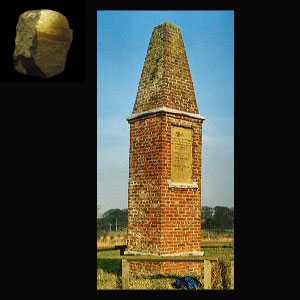 (./images/668.jpg) The meteor and the monument in wold cottage, Yorkshire, England.

The Russian meteor fall is a rare occurrence of meteor that was well observed and videotaped by many. But, mostly meteors do keep a low profile and do have the habit of falling in godforsaken places. Until the 1800s, they were rarely sighted and their origins were shrouded in mystery.

For many years, people thought the brilliant streaks of fire in the sky were made by UFOs or spewed by volcanoes. There was also a lot of superstition surrounding their fall, while some thought it was bad omen and others a sign of good fortune sent by God.

So, how did we know that meteors came from the space and not from volcanoes on earth?

On 13 December 1795, John Shipley sighted a stone fall from the sky and land on the farm he worked in Wold Cottage in Yorkshire, England. The remarkable aspect of this fall was that it could not be dismissed as a volcanic spew by any stretch of imagination. With no volcanoes in the vicinity and the nearest 563 miles away in Iceland, there was no way the stone would have got here in that manner. So where did it come from?

This question prompted Joseph Banks, an influential scientist, to commission a study all fallen objects on record. His study concluded that all these mysterious objects resembled each other in some ways but nothing with any other object found on earth. This finding led scientists to conclude that these objects indeed fell from sky

There was so much public interest in the meteor that the farm owner not only erected a monument on the spot it fell but also sold the meteor for a handsome price to a private museum owned by the British naturalist, James Sowerby. After Sowerby’s death, one of his relatives sold the meteor to the Natural History Museum. This is how the NHM came to possess one of the most famous meteors in the world - one that obviously played a vital role in determining the extraterrestrial origin of meteors

By the way, the Natural History Museum has one of the most amazing collection of meteorites in the world. Visit in person, online or through vusiem. In fact, vusiem is running a promotion that if you review the app on the store, you can get a desktop version for free from their website. The desktop version is super for children and you should get it if you can!