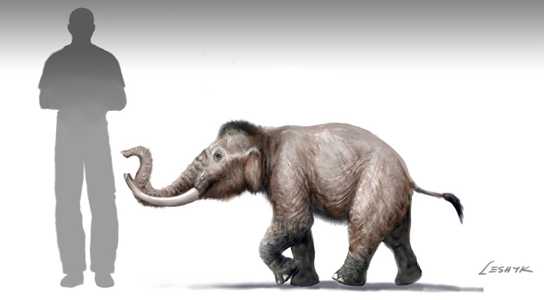 Long ago, elephant ancestors swam from mainland Europe in to the island of Crete, just off Italy. The isolated environment of the island provided great protection from predators. Over time though, something happened that changed their features dramatically. But what?

We all know how Moa and Dodo became super sized and lost flight due to their relative isolation and protection in an island void of predators and other dangers. The giant Galapagos tortoise is a perfect example of this phenomena called ‘island gigantism’

The Cretan elephants actually went through the opposite - ‘island dwarfism’. As they were devoid of dangers, there was no real need to remain huge. Further being small they only needed much smaller quantities of food and this works to your advantage in an island, were the food availability is limited. But, we did not know about this remarkable fact until Dorothea Bate discovered an elephant tooth in a Cretan cave in 1901.

](./images/667.jpg) Dorothe Bate found this elephant tooth in a cave in Crete[/caption]

Dorothea joined the Natural History Museum only aged 19. She was both a daring and brilliant fossil hunter. The year 1902 saw her go fossil hunting in the most remote corners of Crete. She ventured alone in to remote caves hoping to find fossils. In the end, all she found was a tooth. But she was brilliant to recognize that this was no normal tooth. Although it was small, she did did not think it belonged to a baby elephant but that of a dwarf adult! This is because she noticed wearing patterns in the tooth which would only show up after use. And that observation made her rightly famous for this fantastic discovery.

But how do we know this?

Back to the tooth

It so happens that when elephant teeth wear out, they leave different patterns - Straight tusked African and Asian elephants leave long elliptical patterns and curvy tusked mammoths leave small oval rings in groups alongside these ellipses. So by using comparative anatomy, it has been suggested that the tooth is perhaps that of a dwarf mammoth.

Yes indeed. Thanks to Bate’s notes, employees of the Natural History Museum recently retraced their way to the cave where the tooth was found, nearly a hundred years after Bate, and unearthed more evidence in the form of bones. Analysis of these bones have led to the conclusion that there were dwarf mammoths in Crete, each not taller than a baby Asian elephant!